How Therapy Can Help in the Golden Years 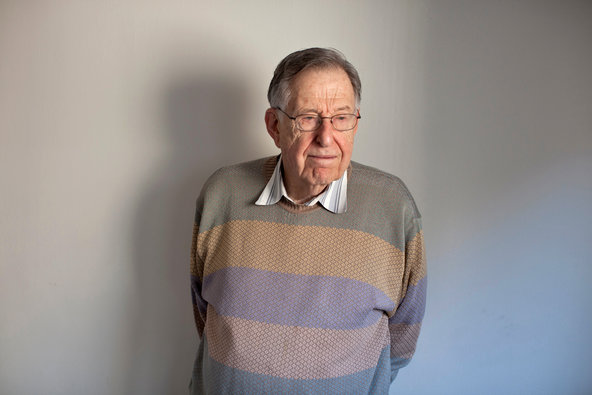 Michael Kirby Smith for The New York TimesMarvin Tolkin, 86, says his monthly therapy sessions have been “making the transition of living at this age in relation to my family very doable.” Hear from Mr. Tolkin and two more seniors here.

Marvin Tolkin was 83 when he decided that the unexamined life wasn’t worth living. Until then, it had never occurred to him that there might be emotional “issues” he wanted to explore with a counselor.

“I don’t think I ever needed therapy,” said Mr. Tolkin, a retired manufacturer of women’s undergarments who lives in Manhattan and Hewlett Harbor, N.Y.

Though he wasn’t clinically depressed, Mr. Tolkin did suffer from migraines and “struggled through a lot of things in my life” — the demise of a long-term business partnership, the sudden death of his first wife 18 years ago. He worried about his children and grandchildren, and his relationship with his current wife, Carole.

“When I hit my 80s I thought, ‘The hell with this.’ I don’t know how long I’m going to live, I want to make it easier,” said Mr. Tolkin, now 86. “Everybody needs help, and everybody makes mistakes. I needed to reach outside my own capabilities.”

So Mr. Tolkin began seeing Dr. Robert C. Abrams, a professor of clinical psychiatry at Weill Cornell Medical College in Manhattan. They meet once a month for 45 minutes, exploring the problems that were weighing on Mr. Tolkin. “Dr. Abrams is giving me a perspective that I didn’t think about,” he said. “It’s been making the transition of living at this age in relation to my family very doable and very livable.”

Mr. Tolkin is one of many seniors who are seeking psychological help late in life. Most never set foot near an analyst’s couch in their younger years. But now, as people are living longer, and the stigma of psychological counseling has diminished, they are recognizing that their golden years might be easier if they alleviate the problems they have been carrying around for decades. It also helps that Medicare pays for psychiatric assessments and therapy.

“We’ve been seeing more people in their 80s and older over the past five years, many who have never done therapy before,” said Dolores Gallagher-Thompson, a professor of research in the department of psychiatry at Stanford. “Usually, they’ve tried other resources like their church, or talked to family. They’re realizing that they’re living longer, and if you’ve got another 10 or 15 years, why be miserable if there’s something that can help you?”

Some of these older patients are clinically depressed. The National Alliance on Mental Illness reports that more than 6.5 million Americans over age 65 suffer from depression. But many are grappling with mental health issues unaddressed for decades, as well as contemporary concerns about new living arrangements, finances, chronic health problems, the loss of loved ones and their own mortality.

“It’s never too late, if someone has never dealt with issues,” said Judith Repetur, a clinical social worker in New York who works almost exclusively with older patients, many of whom are seeking help for the first time. “A combination of stresses late in life can bring up problems that weren’t resolved.”

That members of the Greatest Generation would feel comfortable talking to a therapist, or acknowledging psychological distress, is a significant change. Many grew up in an era when only “crazy” people sought psychiatric help. They would never admit to themselves — and certainly not others — that anything might be wrong.

“For people in their 80s and 90s now, depression was considered almost a moral weakness,” said Dr. Gallagher-Thompson. “Fifty years ago, when they were in their 20s and 30s, people were locked up and someone threw away the key. They had a terrible fear that if they said they were depressed, they were going to end up in an institution. So they learned to look good and cover their problems as best they could.”

But those attitudes have shifted over time, along with the medical community’s understanding of mental illness among seniors. In the past, the assumption was that if older people were acting strangely or having problems, it was probably dementia. But now, “the awareness of depression, anxiety disorders and substance abuse as possible problems has grown,” said Bob G. Knight, a professor of gerontology and psychology at the University of Southern California, and the author of “Psychotherapy With Older Adults.”

A report by the Substance Abuse and Mental Health Services Administration found that about half of all Americans ages 50 to 70 will be at high risk for alcohol and marijuana abuse by 2020, compared with less than 9 percent in 1999.

In years past, too, there was a sense among medical professionals that a patient often could not be helped after a certain age unless he had received treatment earlier in life. Freud noted that around age 50, “the elasticity of the mental process on which treatment depends is, as a rule, lacking,” adding, “Old people are no longer educable.” (Never mind that he continued working until he died at 83.)

“That’s been totally turned around by what we’ve learned about cognitive psychology and cognitive approach — changing the way you think about things, redirecting your emotions in more positive ways,” said Karl Pillemer, a gerontologist and professor of human development at Cornell, and author of “30 Lessons for Living.”

Treatment regimens can be difficult in this population. Antidepressants, for instance, can have unpleasant side effects and only add to the pile of pills many elderly patients take daily. Older patients may feel that they don’t have the time necessary to explore psychotherapy, or that it’s too late to change.

But many eagerly embrace talk therapy, particularly cognitive behavioral techniques that focus on altering thought patterns and behaviors affecting their quality of life now. Experts say that seniors generally have a higher satisfaction rate in therapy than younger people because they are usually more serious about it. Time is critical, and their goals usually are well defined.

“Older patients realize that time is limited and precious and not to be wasted,” said Dr. Abrams. “They tend to be serious about the discussion and less tolerant of wasted time. They make great patients.”

After her husband died two years ago, Miriam Zatinsky, a retired social worker who is now 87, moved into an independent living facility at Miami Jewish Health Systems. It was a difficult transition to make late in life.

“It was really strange to me, and I couldn’t seem to make any friends here,” Ms. Zatinsky said. “I really couldn’t find my way. I was having a terrible time.”

The medical director for mental health at the facility, Dr. Marc E. Agronin, a geriatric psychiatrist and the author of “How We Age,” told her that her problems were not unusual for someone in her situation, and encouraged her to make some friends. He prescribed Xanax to help with anxiety, which she said she rarely takes, and he put her in touch with a social worker, Shyla Ford, whom Ms. Zatinsky saw once a week until Ms. Ford moved (Ms. Zatinsky now has a new social worker she talks to). They strategized on how she could reach out. And slowly, she did.

“Sitting at the table for dinner, you talk to people,” said Ms. Zatinsky, who has become president of her building.

Typically, 15 to 20 sessions of talk therapy are enough to help an older patient, unless he or she is struggling with a lifetime’s worth of significant problems. Still, even long-term issues can be overcome.

After a debilitating depression in which she spent three months unable to get out of bed, Judita Grosz, 69, of Pembroke Pines, Fla., decided to see Dr. Agronin, who prescribed medication. (She also tried group therapy but didn’t like it.) He also practiced some cognitive behavioral techniques with her — for instance, requiring her to get dressed every day for a minimum of 15 minutes.

Eventually, she began to feel better. “I learned to adjust my thinking, and I don’t get as anxious as I used to,” said Ms. Grosz, who has since begun making and selling jewelry. “I found out at this age that I am artistic and creative and innovative and smart. I just woke up to the fact that I have a mind of my own. Talk about a late bloomer.”

Dr. Agronin, who still meets with Ms. Grosz monthly, said, “You might not be able to gain a magical insight and wrap up their entire life in therapy, but you might be able to accomplish one or two small but meaningful goals.”

Sometimes, what older patients really need is help putting a lifetime in perspective.

“Things can be seen differently from the perspective of old age that relieve some guilt and challenge assumptions that you’ve had for decades,” Dr. Abrams said. “ ‘Maybe it wasn’t too terrible after all; maybe I shouldn’t blame myself.’ Maybe some of your worst mistakes weren’t so egregious, and maybe there were unavoidable circumstances you couldn’t control.”

“Everybody has a certain amount of heartache in life — it’s how you handle the heartache that is the essential core of your life,” Mr. Tolkin said. “I found that my attitude was important, and I had to reinforce positive things all the time.”

He said he wishes he had tried therapy years ago. But he adds: “I can’t go back. I can only go forward.”

Questions, issues or concerns? I'd love to help you!